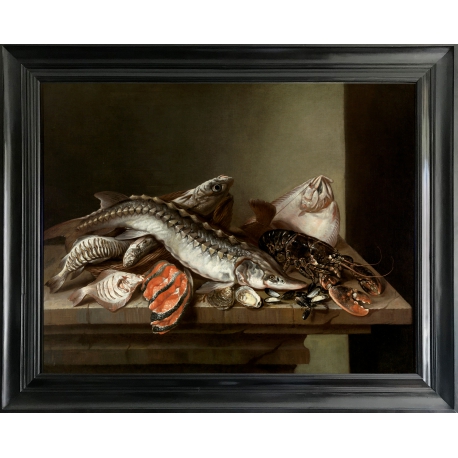 Ebony Frame: van Gogh quote, "A picture without a frame is like a soul without a body". With this old authentic ebony frame, the masterpiece is “Ready to Hang”. This authentic frame is original ebony wood according to the 17th century. The wood was growing in, nowadays called, Indonesia which was a colony of The Netherlands and is no longer processed today for ecological reasons.

The naturalistic depiction with an expressive light mood is a timeless masterpiece. Contrasted with modern furnishings, this still life will become an eye-catcher in your home, for example, in the dining room. It will be part of your dinner table and conversation at the table.

The choice of fishes contains the most commonly caught species at the time: the Atlantic surgeon, a lobster, salmon, a herring, plaice, haddock, mussels and oysters. Of these only the plaice is still quite common today, the others are either no longer present in Dutch waters, such as the sturgeon and the salmon, or cultivated in special basins, such as the lobster, the oyster, or bound to a limited catch such as the turbot.

The independent genre of the fish still life was developed in the first half of the 17 th century in Antwerp by Frans Snijders, Jan Fyt and Alexander Adriaenssen. Its origin was found in the market and kitchen still lives by Joachim de Beuckelaer and Pieter Aertsen of the previous century. In the North the genre became popular since circa 1650, where by both Utrecht and The Hague became the main centers for production. In Utrecht Willem Ormea painted coastal landscapes with fish on the shore, while Jacob Gillig specialized in finely painted still lives of a choice of sweet water fishes. In The Hague, Pieter de Putter equally provided the market with sweet water fish still lives, while both Abraham van Beyeren en Isaac van Duynen were specialising in salt water fishes. The genre reached its peak in the 1670s but subsequently declined in popularity.

The art of Isaac van Duynen: a specialist in the genre of the fish still life in the Dutch Golden Age.

Born in Dordrecht, van Duynen travelled to Italy in the 1650’s and upon his return settled in The Hague. There he and Abraham van Beyeren both painted fish still lives, the first in a broad and loose painterly manner, van Duynen in a finer style, which to modern onlookers today almost appears as anticipating photorealist painting of the 20 th century. However, where photorealism intends to create a sense of alienation in its use of cool tones of the same range and intensity, Van Duynen reduces his colors to enhance the sense of beauty and magic connected to all living species, in this case the salt water fishes he has chosen to depict.

As a true specialist in the genre van Duynen gained considerable success with his paintings at the time. His paintings are frequently mentioned in inventories of highly placed officials of the government. The present painting, although undated, is probably from the 1670’s and belongs to the best works by the artist.