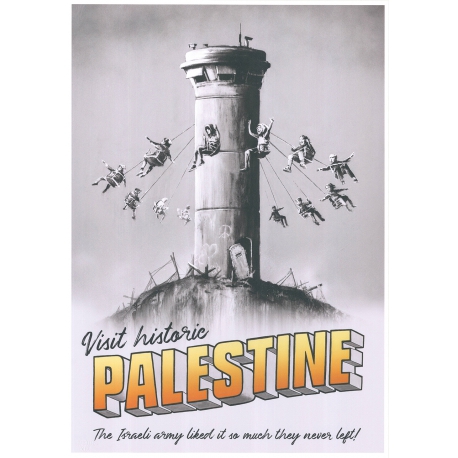 Banksy is considered one of the most famous graffiti artists in the world, although the artist has so far successfully kept his civil name and true identity a secret. Presumably born in the 1970s near Bristol, England, Banksy first became known in Bristol and London in the late 1990s through his provocative stencil works.

Banksy is the subject of the 2010 documentary Exit Through the Gift Shop, which explores the relationship between commercial art and street art.

With his ironic, political and at the same time poetic works, the artist questions, among other things, the mechanisms of the art market and has developed a distinctive style with his stencil works, which mostly take up and critically negotiate situational and site-specific themes.

Banksy complements his work with multimedia elements and action art. For example, in October 2013, a man sold the artist's paintings for $60 each near Central Park. Even better known is the shredding of his work "Girl with Balloon" staged by Banksy at the auction, which, as a long-planned action, took the art market at Sotheby's auction house, in the belly of the beast, so to speak, to absurdity.