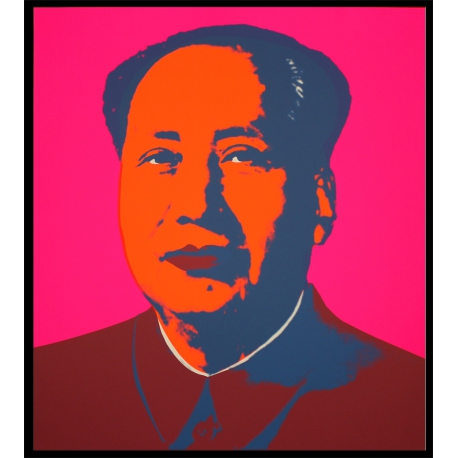 Based on the official portrait of Mao on the cover of the Little Red Book.
Inspired by the mass ideology of Maoism and Mao's cult-like following in Chinese society.
In 1972, Life Magazine declared Mao Zedong the most famous person in the world.
The series of Mao was the first time Warhol depicted a political figure.


The serially used silkscreen technique is reminiscent of the mass-produced propaganda posters that were widespread in China under Mao's regime. Warhol's colouring counters the propaganda with subtle kitsch, combining Eastern mass ideology with Western aesthetics.
"I have been reading so much about China. They’re so nutty. They don’t believe in creativity.
The only picture they ever have is of Mao Zedong. It’s great. It looks like a silkscreen." (Warhol)