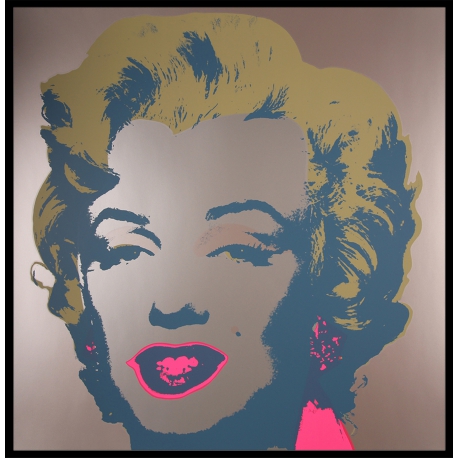 Based on a press photograph of Marilyn Monroe by Gene Korman for the 1953 film Niagara.

Original in the collection of the Tate Gallery of Modern Art in London.

Warhol's Marilyn is considered his most famous icon, as she represents the personification of American popular culture of her time like no other.

In his depictions of celebrities, Warhol shows the relationships between consumer society, fashion, fame, sensationalism and death.

In this society, the individual is seen more as a product or projection surface than as a human being.


The prominent starlets of the Popolymp are flawless in Warhol's depictions. The idealisation represents Warhol's feeling that these personalities were surrounded by an extraordinary aura and revered almost like sacred figures by their fans.

The Marilyn series was created only two weeks after her suicide. Warhol's portraits also remind us that behind the fame and glamour of these Hollywood careers were real people.

The silkscreen technique was an important part of Warhol's artistic creation, influencing his style and career, as it was the most effective method of producing mass prints in his time.