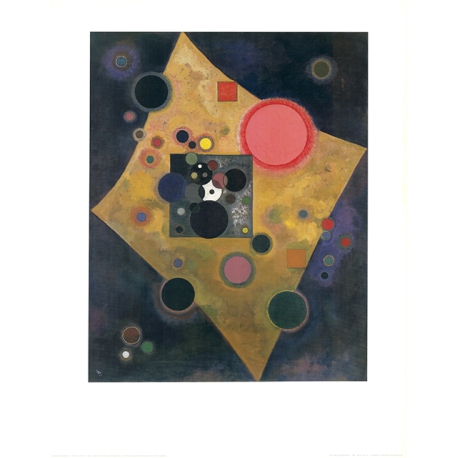 *Moscow 1866 - Neuilly-sur-Seine died 1944. Russian painter, graphic artist and art theoretician. 1896 Kandinsky came to Munich and attended Anton Azbé's private art school for two years. Then he studied at the academy of arts in Munich under Franz von Stuck.
At the time of the "Neue Künstlervereinigung" in Munich around 1909, Kandinsky was already envisioning a new art form, whose contents should be completely detached from the object, colours and forms should be used freely, following the inner urge of the artist.
In 1910 he painted his first abstract picture with watercolours. One year later he created his first abstract, non-objective painting "Composition V". After "Komposition V" was rejected by the jury of the "Neue Künstlervereinigung" for an exhibition, Kandinsky left the group of artists and, together with Franz Marc, founded the artists' association "Der Blaue Reiter" in 1911 and organised international avant-garde exhibitions in Munich.
In 1921, Kandinsky began teaching at the Bauhaus School in Weimar until the school was closed down by the National Socialists in 1933.