> Works on Paper>Beauty has depth...
New 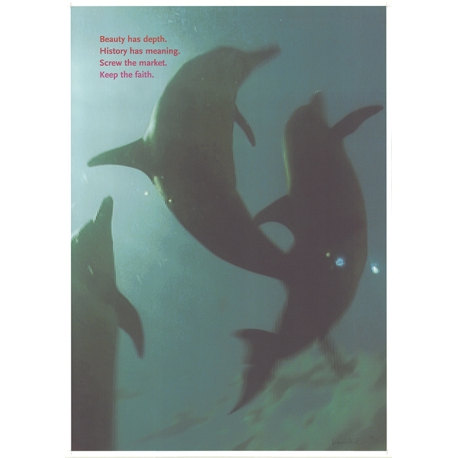 "Beauty has depth.
History has meaning.
Screw the market.
Keep the faith."

Diana Thater, US artist, curator, writer and pedagogue, was born in San Francisco in 1962.
Studied art history at New York University,
Master of Fine Arts at the Art Center College of Design in Pasadena, California.

Since the early 1990s, Los Angeles-based artist Diana Thater has created a pioneering combination of film, video and installation art whose main theme is the tension between the natural environment and media reality, and thus between the tamed and the wild.

Thater is known for her environmental activist artworks; among other things, she already worked with wolves in 1996 and was a guest artist at the "Dolphin Project" from 2000 to 2006, a non-profit organisation founded by Richard O'Barry in 1970 to protect marine mammals from slaughter and captivity.

Works by the artist are represented in museum collections worldwide, including the Art Institute of Chicago, the Carnegie Museum of Art, Pittsburgh, the Friedrich Christian Flick Collection at the Hamburger Bahnhof - Museum für Gegenwart, Berlin, the Solomon R. Guggenheim Museum, New York, and the Whitney Museum of American Art, New York.