> All Artworks>Interior of a Oceanologist
New 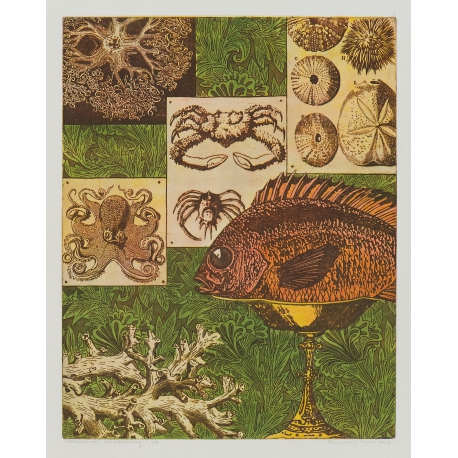 Interior of a Oceanologist

The natural scientist is someone who, like an artist, is 'in another world' when he is at work. The interiors explore the possibilities of the two-dimensional plane to create an illusion of space. Flat wall surfaces create the impression of a room, while objects, paintings and decorated wallpaper suggest an entirely different space: the jungle or the sea.

In fact, what we see is as flat as the paper on which the representation is printed. This two-dimensional representation creates not only the illusion of space but also of movement, of life.

This series of etchings depicts, as it were, the adult's dual attitude towards the imagination: on the one hand, the desire to merge into a world of fantasy just like the playing child, on the other hand, the fateful awareness that this fantasy world is not real.

The work themes precisely this tension between the inanimate images and the life depicted.

To be sources of inspiration: 17th century engravings in the atmosphere of Piranesi, natural science, literature and first and foremost the romantic longing for a world that is not there but that you can only dream of.

In designing the etchings, Petri uses the collage technique, creating complex and often surprising compositions. Then the drawing is drawn on one etching plate and bitten in stages. The etchings are multi-color prints. By always 'painting' a colour on the plate and then printing it 'wet in wet', an effect of depth is created.