> All Artworks>The City where People had learned what Forgiveness is 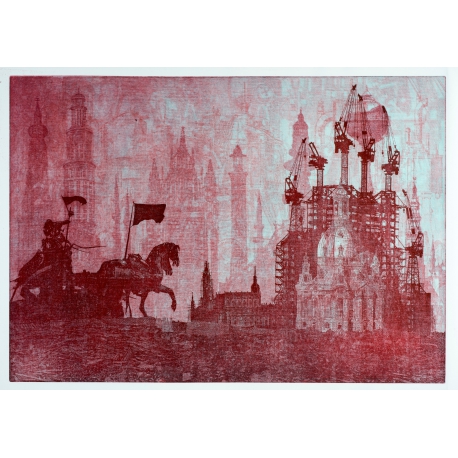 The City where People had learned what Forgiveness is

The cities and time.

This new series of etchings is a sequel to my previous series 'the invisible cities', inspired by Italo Calvino's novel. Both series are not about cities on their own but on an underlying theme. In this case it is about change and the time that passes.

In these etchings different times can be seen in one image: past, present and future. To create this image I use several etching plates that I print on top of each other. A number of plates I made especially for this purpose but I also use plates from previous series. This creates very complex compositions. In these etchings you can look through the cities and buildings which gives you the idea that the different times coincide.

The fascinating thing about time is that we can't understand it even though we still have so many clocks. Time can go slowly, slip through our fingers, pass by or never come.

The city where people had learned what forgiveness was.

The idea for this etching originated during a visit to Dresden. This city made a huge impression on me. You feel very strongly the past but also the vitality and resilience of the people who live there. The city is a symbol of reconciliation despite the right-wing extremism which is also very clearly present.

In this etching you see different times in one image. The bombed city, the rebuilding of the Frauenkirche and vaguely in the distance the future. Because there is always a future if we can forgive each other.