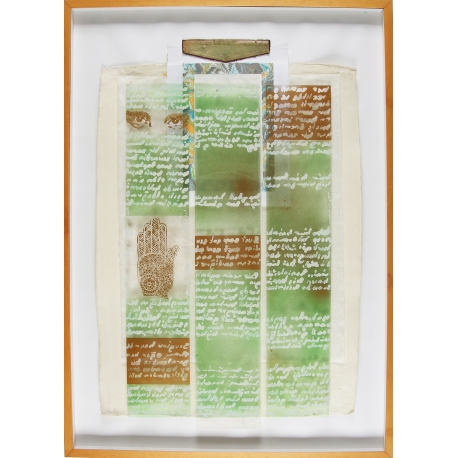 Murat Morova is a Turkish Artist, born in Istanbul in 1954. After graduation from the Faculty of Fine Arts of the Marmara University, Morova participated in various (group) exhibitions. Some examples include “Beyond Figure” in 1987 and his solo exhibition “A Season in Hell” in 1989.

Since then Morova had more succesful exhibitions in Germany, Italy, Denmark, France, Japan, Argentina and Greece. In 2012 Murat Morova exhibited his work in “Journeys: Wanderings Through Contemporary Turkey” in the Louis Vuitton Foundation in Paris.

The subjects and sources, such as the abreast state of the East and the West; the liaison between an indivudual’s internal and external nature; mysticism, tradition, body, Islam and Sufism form the essence of Morova’s realm of sense. Correspondingly he appeals for the “other” materials in his works; he reproduces non-traditional materials that the industrial society turn into waste, such as nylon, tar and fiberglass.

Murat Morova is also one of the most respected Turkish Human Rights activists.