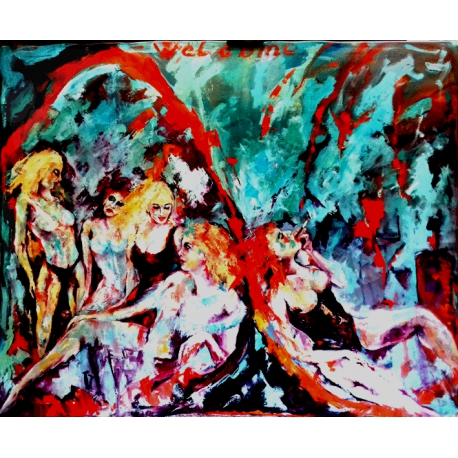 During her education in Worpswede R. VOGEL-STELLING "found out how to free ecstasy, to free her characteristics, to make the canvas vibrate when painting on it" said Antke Bornemann, the convenor responsible for cultural affairs in the community of Lilienthal, on the occasion of an art exhibition.

R. Vogel Stelling paints on instinct. Only a few artists do so nowadays. She expresses her feelings in her paintings.

R. Vogel-Stelling is extremely engaged in painting, in eveything that is going on around her.

1987 - 2020
Over 70 solo and group exhibitions in art galleries and public institutions at home and abroad. Special highlights in the life of the painter:

1994
R. VOGEL-STELLING was authorized by the Bremen Senate to exhibit her two large paintings "GRENZEN-los" and "Prager Botschaft, 30 Sept. 1989" - two works of contemporary history - on the occasion of the "TAG DER EINHEIT" (federal festival act) at the Bremen Congress Center.

1996
She was entered in the DOCUMENTA Archive/KASSEL with her major work "QUO VADIS".

1997
A meeting with Michail GORBATSCHOW took place at the Park-Hotel in Bremen, where she personally presented her work "GRENZEN-los" for the Gorbatschow Foundation-Moscow. The Office of the Federal President of Germany suggested that Renate VOGEL-STELLING be awarded the Order of Merit of the Federal Republic of Germany for this gesture of international unity.

Oct. 2010: Personal invitation.
The President of the Senate of the Free Hanseatic City of Bremen - Mayor Jens Böhrnsen - invites R. Vogel-Stelling to the ceremony: