> All Artworks>The fantastic World of Fabulos and Waves Women 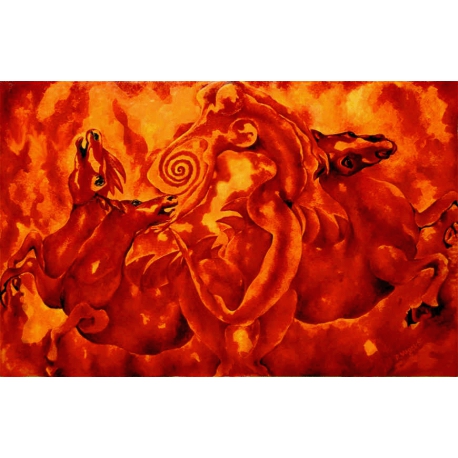 The fantastic World of Fabulos and Waves Women

"It was an incredibly stormy sea. The waves were crashing against the rocks meters high, and the whitecaps formed intertwined, swaying bodies, some without heads, arms and legs. The heads of these half terrestrial, half supernatural beings ended in the form of a spiral, whirlpool or vortex.

It was like a vision for me; exuberant forms full of passion and joy of life emerged before my eyes. My wavy women took shape and I saw them clearly before me.

I simply had to bring this to the canvas with paint and brush; I was fascinated by the idea, and besides, it had to be a very special brush stroke. I experimented with the colours, discarded again ideas and new ones arose. I let my hand run over the canvas, and as if by chance, this special brushstroke was created - the brushstroke like a wickerwork. Depending on the incidence of light, different reflections are formed. I designated this brush stroke REVOST-STRUCTURE.

The big challenge for me was the fact that the work has to be created in one "cast" - without a break, without any possibility of improvement; it is incredibly exhausting and it requires all my strength, but it has to be like this.

My WELLENWEIBER compensate me for the effort, I am satisfied."

1987 - 2020
Over 70 solo and group exhibitions in art galleries and public institutions at home and abroad. Special highlights in the life of the painter:

1994
R. VOGEL-STELLING was authorized by the Bremen Senate to exhibit her two large paintings "GRENZEN-los" and "Prager Botschaft, 30 Sept. 1989" - two works of contemporary history - on the occasion of the "TAG DER EINHEIT" (federal festival act) at the Bremen Congress Center.

1996
She was entered in the DOCUMENTA Archive/KASSEL with her major work "QUO VADIS".

1997
A meeting with Michail GORBATSCHOW took place at the Park-Hotel in Bremen, where she personally presented her work "GRENZEN-los" for the Gorbatschow Foundation-Moscow. The Office of the Federal President of Germany suggested that Renate VOGEL-STELLING be awarded the Order of Merit of the Federal Republic of Germany for this gesture of international unity.

Oct. 2010: Personal invitation.
The President of the Senate of the Free Hanseatic City of Bremen - Mayor Jens Böhrnsen - invites R. Vogel-Stelling to the ceremony: