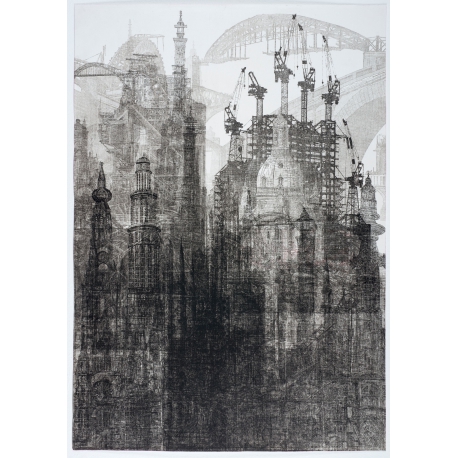 The cities and time.

This new series of etchings is a sequel to my previous series 'the invisible cities', inspired by Italo Calvino's novel. Both series are not about cities on their own but on an underlying theme. In this case it is about change and the time that passes.

In these etchings different times can be seen in one image: past, present and future. To create this image I use several etching plates that I print on top of each other. A number of plates I made especially for this purpose but I also use plates from previous series. This creates very complex compositions. In these etchings you can look through the cities and buildings which gives you the idea that the different times coincide.

The fascinating thing about time is that we can't understand it even though we still have so many clocks. Time can go slowly, slip through our fingers, pass by or never come.

The cities in which we live have grown over the centuries under the influence of very different factors: poverty, prosperity, climate, wars ... All these factors together determine how the city has become.

Like the cities of Calvino, these designed cities do not really exist. Each city shows just one of the many aspects that make a city a normal city.