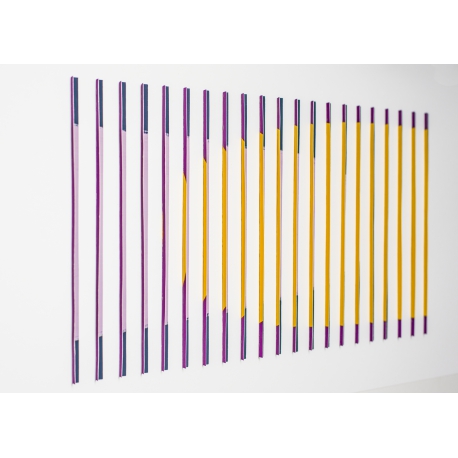 "... Ina Abuschenko's swinging 'Lichtbilder', which she lets correspond with texts by Tanja Langer, are also a transitional element: Both are multiple translations in the sense of crossing from impression to expression, to artistic form. With the nuanced coloured paper objects, the age-old concept of relief is subtly and freely reanimated as a relationship of planar movement to deep movement and thus from the second dimension to the third. The objects lead directly into the tension-filled relationship between body and world as a relief that differentiates itself on both sides, floating between perception and sense of touch, between emergence and disappearance. Ina Abuschenko's works play with the enigma of before, behind, in between, hiding and opening. Her folds, which take the Norwegian landscape as their starting point, open up and unfold multi-layered questions about our perception, exploring the intricate relationship between model and image, between mimesis and creation. And it seems as if the event of perception is only then played out in the multi-layered, diaphanous pictorial formations, which - again and again - occurs as a similarity in the dissimilar, which manifests 'the power of one's own creation' in visible forms.
While looking at Robbe-Grillet's novel Die Jalousie, a text made up of what we have seen, memories, hallucinations and dreams, shimmering in the light, it occurred to me. The text works with constant changes of perspective, with images, with image details. In the course of the day, with the position of the sun, the detail that the narrator can see also changes continuously: blinds always provide only fragments of the event, never a comprehensive view..."

Ina Abuschenko-Matwejewa was born in 1969 in Bernau, studied German language and literature/art studies at the Humboldt University in Berlin in 1988/89, from 1991-96 she studied paint/graphics at the Dresden Academy of Fine Arts. After graduating, she went to Berlin, studied for two years at the University of the Arts in the Art in Context course. With the birth of her daughter she moved to Eberswalde in 2008. In addition to her artistic activities, she has been working as an art and movement therapist in the Forensic Psychiatry Department in Eberswalde since 2010.

Her works, in which she explores the tension between light and colour in her own way, have been shown in many places, including the KunstHaus Potsdam in 2019, the Galerie AE Potsdam, the Kunstverein Meissen e.V. Querung with the artist Andreas Schmid in 2018, and the exhibition of the Endmoräne e.V. Weiße Schatten - Wege durch die verlassene Papierfabrik in Eberswalde in 2017. Her series Schattenmänner was shown in 2017 at the opera project Die Kriminellen der Frau A. - auf dem Weg zu Ovartaci in the workshop of the Staatsoper Berlin, 2016 she showed her works together with the photographer Barbara Schnabel in the Galerie Mutter Courage, Berlin, 2015/16 Tragweite, Museum dkw Cottbus, 2014 Oppetreppe, Galerie der Bausparkasse Schwäbisch Hall, 2013 Poesie des Fragment, Kloster Chorin and many more.

She is co-founder of the Neuer Blumenplatz in Eberswalde.